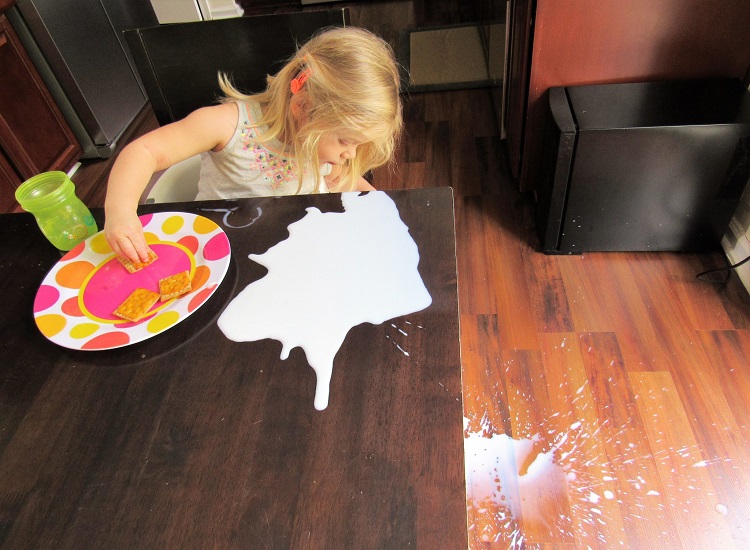 The Crying Over Melted Milk in Home

We went away this weekend

Ryan had Friday off, so we planned to leave a little early to get a head start.  I woke up Friday morning, started a pot of coffee and went about getting ready.  When the coffee was done, I went to the refrigerator to get the milk, and that’s when I noticed it- the freezer door was open.

We have gotten into the very bad habit of treating ourselves to ice cream- a craving leftover from my pregnancy- and we had some the night before.  We picked up dinner and some Ben & Jerry’s to celebrate Thursday night being our Friday night and the start of our little getaway.

I overpacked the freezer with some bread I baked earlier in the day, and when Ryan put the ice cream away, the door didn’t close all the way.  Normally we don’t have that much in the freezer, but now it’s different.

I had about 40oz. of frozen milk in the freezer Milk that I spent so much time pumping.  I was so proud of the little stash I was building to help Will when I go back to work.

Naturally, I freaked out.  I was crying and was pretty hysterical.  The milk was mostly slushy.  Some were almost all the way defrosted, some were still pretty frozen.  I thought I had to throw all of it out.  Ryan used the ever-useful Google to see if we could keep any and read that if it was still slushy I could keep it.

I, naturally, went to twitter with my concerns and woes, knowing that my friends on there would surely have an answer for me.  I also called two lactation consultants and a La Lecher League leader.  No one would answer, and I was so frustrated!

I had just talked with my friend Julie a few days before about how to build up my supply.  She was so encouraging and helpful.  After talking to her, I was confident I could do this and started on a schedule.  To see that hard work melt in front of me was horrible.

I finally got a call from the LLL leader, and Julie and another friend saw my twitter posts and answered back.  The LC called later too.  Thankfully, I only had to “throw out” about 10oz.  The rest was able to be put back in the freezer.  I didn’t throw out the defrosted milk either…I used most of it to try to get Will to take a bottle.  He is getting better, but is still not a fan- but that’s another story.

So…we were able to leave and go on our little trip!  We had a great time.

Now, fast forward to Sunday Once we were on our way upstate, I deleted Twitter off of my phone.  I’m way too guilty of checking it too many times a day, and I wanted to focus on my family and not my phone for the weekend.  When we were headed back home, I checked Instagram and noticed a comment on someone’s picture, and it sparked something in me- I knew something was wrong.

Normally I would go to twitter, but I didn’t have it!  So, I went to Facebook.  I saw that people were commenting on Julie’s page.  They kept mentioning prayers for her and her daughter Presale over and over…but no one mentioned her husband, Matt.

I started shaking and tried to tell Ryan that something was very wrong.  I went to Google.  Julie’s husband is a news anchor, so I knew there would be news if something happened.  My fears were confirmed when I saw that Julie’s husband Matt was tragically killed in a car accident Saturday night.

There are no words for how devastating this is for her family.  I thought about what Julie shared with me earlier in the week- how she was enjoying her time at home with Presale since their recent move to Little Rock.

I have seen so much good rise out of this tragedy.  A few girls immediately rallied on twitter to pull together money for flowers, but the donations were so great that we were able to contribute to a college fund being set up for Presale.  There will be a silent auction online next week, with all of the proceeds going to Julie and Presale.

The Best Tips for Setting Up Your Home Buy

The Best Kitchen Stripes in the Home

Getting the Best Interior Paints for your Business

The Importance of Pest Control to Food Safety

Why Hire Professional for Your Home Plumbing Services?