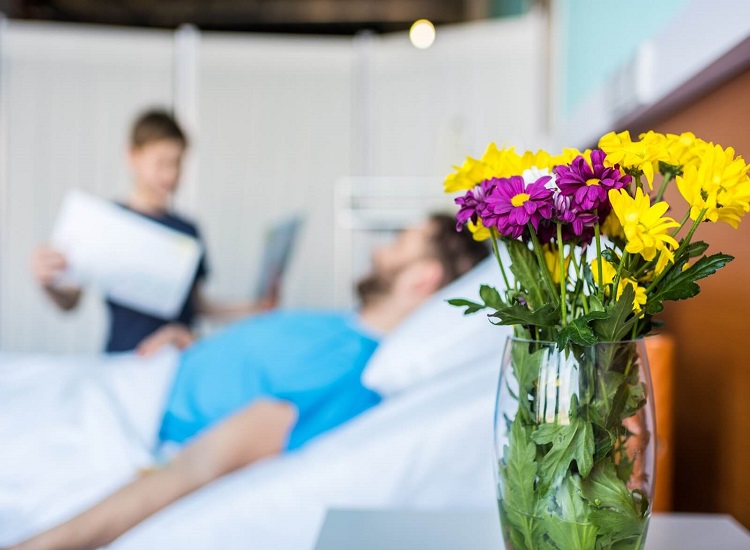 Days spent in the hospital recovering can be difficult, and sometimes the only thing that can brighten a person’s day are the flowers, fruit and chocolates brought to them by friends and family. However, for the past decade or so there has been an ongoing debate over, whether giving flowers as gifts are good practice. In most hospitals bringing flowers to patients is not permitted.

Hospitals claim that flowers bring an added risk of infection, while split water and broken vases are said to be dangerous. The fact that flowers and other plants have been proven to have a positive effect on the recovery rates of patients, has been proven by several studies.

Research has shown that although it is possible to find bacteria in the water of cut flowers, but there is no evidence that this kind of bacteria has ever caused infection. As we all know putting bleach in the water kills bacteria, and extends the life of cut flowers, so this problem can easily be solved.

Flower vases, are just as dangerous as jugs or glasses of water, though it has been argued that the water found in vases could cause accidents with electrical equipment.

There is evidence that patients, who are recovering from surgery, need fewer painkillers if they are in a room with flowers. It has also been shown that these patients are less anxious, feel less pain, have lower blood pressure and less chances of having a high heart rate.

This ban seems to have a closer link to the added work posed by the care for these flowers. Nurses face a lot of pressure in the current healthcare system, and are often unable to handle this extra work load.

What should we do, if a friend or relative is in the hospital and we still want to show them our love and care? The first step to take, is contacting the ward to find out whether or not bringing flowers is permitted.

If it is possible, make sure the flowers you take are not big and hard to manage. Avoid taking a glass vase, other options are flowers placed in florist’s foam or a plastic container. Make sure the vase or foam has a firm base, ensuring that it does not tip over. Flowers that have strong scents should also be avoided.

4 Tips for Arranging Flowers at Home

Beyond the Flowers Choosing a Vase

The Unique Orchid and Special With Awesome Blossom Thank You Flowers

Beyond the Flowers Choosing a Vase

4 Tips for Arranging Flowers at Home

4 Flowers That You Can Have at Your Wedding